My work is inspired by the most exotic elements of nature. I love vibrant colors and see them as a tool for my own freedom. Art has always felt natural to me, and its one of the few things that gives me a feeling of complete happiness and peace. By combining the beauty of the natural world with the world of my own imagination, I hope to create something new. In a sense, my art is my own surreal paradise!

For any inquires on my work or prints of the originals email me at daga_poo@yahoo.com.

She has been influenced by a culture that has suffered through the process of change trough the years yet, still finds herself amazed by the beauty of her native Mexico–charged with color and texture, and possessing a startling natural diversity. She strives to present her work to the world with this same vision.

She is inspired by all forms in nature, from the tiniest microbe, the simplest things that are an integral part of our everyday environments, to the grand complexity of all life, from the aesthetics of the human figure and even to the simple beauty in a mineral; she is drawn to the shapes, textures, patterns, designs, and structures produced by nature.

But as a surrealist, she strives to not just to show the astonishing beauty of the world as it is, but also the limitless possibilities of the human imagination. Within her own mind, she creates a new ecology, teeming with myriad forms of novel life, and in doing so, she contributes to the diversity to this world. To be inspired by and to inspire others, she hopes to further the artistic community as a whole. But above all, she believes the highest achievement of an artist is to live with passion and promote passion.

2017   The Most Beautiful Wall http://themostbeautifulwall.com

2011  Participation in Be Bold Competition, Women and Their Work, Austin, TX

University of Texas at Austin—Austin, Texas

Dance Of The Seven Veils 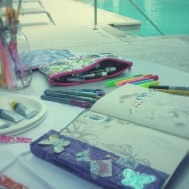 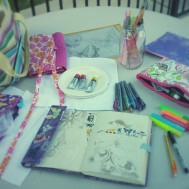